Have you ever worried about being attacked by wasps, hornets, or yellow jackets? Well, these pests belong to the stinging insect category, and they can cause great concern for rents and homeowners. These stinging insects belong to the Hymenoptera order of insects and you’ll need to take steps to remove them from your home and property as quickly as possible. Although stinging insects are concerning, they offer many benefits. They are helpful because they can pollinate plants and crops. If they’re not causing problems for you and your loved ones, you should leave them alone.

Which Stinging Insect Is On Your Property?

Stinging insects can create problems for renting, owners, and managers. To find out what you’re dealing with, you need to consider the insect’s appearance and the nest they created.

Although paper wasps are aggressive, they’re not as aggressive as others. They can create problems, but they shouldn’t unless you get too close to them. Try to stay away from their nest and you should get stung. A paper wasp nest will be small and gray. They feature a round shape and a honeycomb pattern. Paper wasps usually construct their nests on overhands and under eaves, so be sure to look there.

What do they look like? Well, it depends on the species you’re looking at. There are several types of paper wasps including European Paper wasps and Northern Paper Wasps. Both share similar behaviors, but their appearances are different. Northern Paper Wasps are brown with a few deep orange areas. They also have skinny stripes on their abdomens that are either yellow or white. European Paper Wasps are stripped as well, but their stripes are yellow and black.

Yellowjackets are very dangerous and they can sting you multiple times. If you approach a large nest, there is a good chance that you’re going to experience issues. Don’t get close to their nests because they’re vicious. Yellowjacket nests can house thousands of insects simultaneously. The nests are generally covered with a paper material that is either gray or black. If you’re looking for yellowjacket nests around your home, you’ll need to check your attic and porch. Unfortunately, some build underground nests which are harder to spot.

Yellowjackets are fast when flying. They tuck their legs against their bodies and zoom across your yard. They can reach you rapidly so you likely won’t be able to defend yourself fast enough. They have stripes that are black and yellow.

If you’re worried about getting stung, you’ll need to stay away from this aggressive stinging insect. As the colony expands in late summer and fall, they become even more aggressive. They have large nests that house thousands of insects. Their nests are typically built on trees, bushes, and the sides of buildings.

Bald-faced hornets have smooth bodies that are white and black. Their body parts are larger and they have a stinger.

Honeybees aren’t nearly as aggressive as other stinging insects. Some people breed honeybees to be gentle so they won’t attack you. Even if you dance around their nest, you likely won’t get stung. Honeybee nests are intricate and can help you obtain honey. Honeybees use the same nests several years in a roll so they’re going to store honey in their nest. As a result, a lot of people raise honeybees so they can collect the honey.

Honeybees are easy to identify because they have fuzzy bodies with orange heads. They have a stinger and other body parts.

Carpenter bees are not aggressive when compared to other stinging insects. They bore small holes in wood surfaces and use the hole to shelter and care for their young. Although carpenter bees look frightening, they’re not vicious. You can approach a carpenter bee nest without regretting it. They usually do not sting people, but they can.

There are several species of carpenter bees, so the appearance varies significantly. These stinging insects are large and look similar to bumblebees. They are shiny though. They’re not fuzzy like bumblebees. Determining the carpenter bee’s gender is easy since males display a yellow dot near their face.

How Dangerous Are Wasps, Bees, And Other Stinging Insects?

If you have an allergic reaction, there is a risk that you’ll experience an anaphylactic shock. Be cautious because you never know dangerous the insect will be.

Removing Stinging Insects From Your Property

Once stinging insects have taken over your yard, you need to fight back. We recommend hiring a professional exterminator since DIY treatments can lead to numerous issues. When using DIY techniques, there is a good chance that you’re going to experience severe risks. Once you spray the nest, the stinging insects are going to come after you. You’ll likely get stung. Hiring a professional ensures that this does not happen. If you’re going to treat the problem on your own, wait until the sun goes down before spraying the nest. Stinging insects are less aggressive during the evening, but they can still sting you.

How Safe Are Your Stinging Insect Services?

Work with us because our stinging insect services are cost-effective and safe. We work diligently to use the latest pest control techniques and products. We closely follow the recommendations of the EPA to ensure we use chemicals that have been safe and effective. None of our products will pose risks to humans or pets.

You’re likely worried about the price of our services, but you shouldn’t be. We’ll always give you a fair price by judging the following factors.

When Your Exterminator Can Get Started

We understand you want to eliminate your stinging insect infestation rapidly. We’ll send an exterminator to your property as swiftly as possible. After your call, we’ll respond in at least 48 hours.

Stinging insects need to build nests. Many of them will approach your property because it has many excellent nesting locations. For instance, they may decide to build nests on the side of your home, under your porch, or in your wood siding. It won’t be easy to stop them from entering your property, so we recommending using our home service program. Pay a low fee each year, and we’ll visit your property three times annually. If we find pests, we’ll take care of them, and the fee will cover the costs. 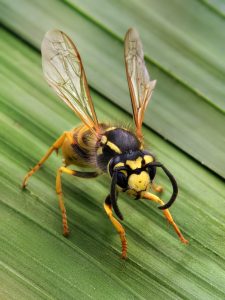